What’s The Half Life of A Marketing Email? 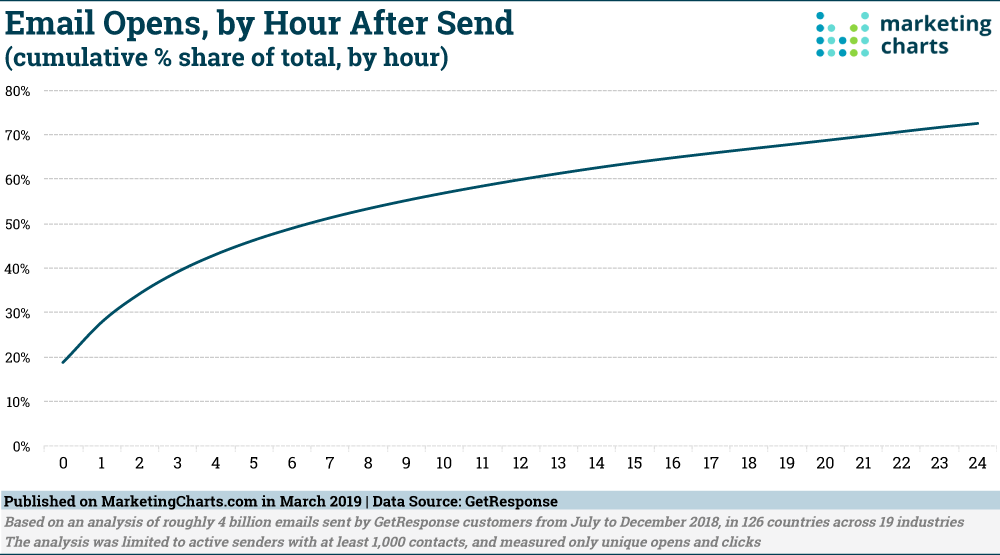 It’s time for an email timing update! One of the biggest challenges that marketers face with email is the competition for attention within the inbox. There’s an argument to be had over whether or not timing helps, but here’s some data nonetheless, starting with the cumulative share of email opens by hour post-send, according to the recent Email Benchmark Report from GetResponse.

The results of the report, which analyzes billions of emails sent during the second half of 2018, show that almost one-fifth of an average email’s total opens occur within the first hour post-send. Opens slowly decrease after the first hour of delivery, to the point where a little more than half (51%) of emails are opened by the 7th hour after they have been delivered.

Looking at past research indicates that email opening behavior hasn’t changed too much over the years. An analysis from 2012, for example, shows that a similar majority (52%) of emails were opened within the first 6 hours post-delivery. This suggests that even as digital engagement methods have proliferated, email remains a channel that most recipients check frequently.

Returning to the GetResponse study, the data indicates that almost three-quarters of an email’s total opens will occur within 24 hours post-send. That does leave more than one-quarter that are opened more than a day after send, though. (As for that 2012 study? It had about 80% of opens occurring in the first 24 hours post-send, so the average email’s half-life may have extended just a little over the years.)

When Is the Best Time To Send Email?

Open rates fluctuate slightly throughout the daytime hours. According to GetResponse, starting at 4AM when open rates are understandably lowest, they begin to rise before o making their first peak at 11AM. The second peak time is at 2PM, after which open rates start to decline as the typical workday draws to a close.

While open rates seem to follow an almost steady path of what might be considered a typical working day with very gradual peaks in performance, click-to-open rates appear to have much more distinct peaks and valleys.

The time of day with the highest click-to-open rate is 6PM, with a spike even over just the hour before. By 8PM the click-to-open rate falls back down the same percentage it was at 5PM. The unique click rate is also highest at 6PM and 7PM, before dropping back down to the averages witnessed during the working hours.

Another notable time is 2AM when the click-to-open rate shows another spike. While this leap at 2AM may seem like an anomaly, it is reflected in data from past research from MailerMailer which showed this same peak in open rates in the early hours of the morning. It seems as though people who are opening emails in the overnight hours may be more engaged with them – perhaps due to less competition for their time.

Finally, in analyzing response rates by day of the week the report indicates that Tuesday could be the best day of the week to send an email (although there is the requisite disclaimer: individual results may vary!). It has the highest open rate and the highest click and click-to-open rates of any day of the week, though it should be noted that Thursdays and Fridays are close behind. By contrast, Wednesday has the lowest response rates of the workweek. Click-to-open rates on the weekend are comparable to those during the work week, but unique open and click rates are somewhat lower.

What Management Strategy Should I Use in an Economic Downturn?